Apprentices get on track for successful careers at Mors Smitt 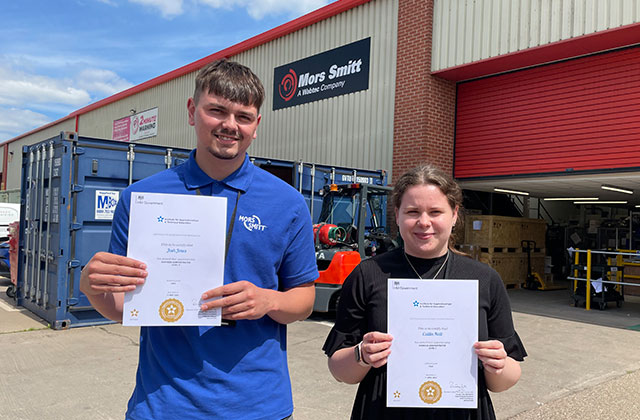 Caitlin Neill and Josh Jones, two Business Administration Apprentices at Mors Smitt, have shown they have the skills and commitment to succeed in business after being offered permanent positions at the company.

During their apprenticeships at the railway systems and component manufacturer, delivered in partnership with Burton and South Derbyshire College, the two apprentices have been given the opportunity to work in all areas of the business before stepping into permanent roles at the end of their qualifications.

Caitlin Neill undertook both Level 2 and Level 3 Business Administration Apprenticeships before being offered a job as a Sales Administrator. She said: “I have enjoyed the apprenticeship at Mors Smitt; I had the chance to gain a variety of skills in procurement, sales and operations. I’m now settled into a role in sales where I enjoy dealing with customers. I would like to continue to work my way up and progress my career in the future.”

Meanwhile, Josh Jones began his Level 3 Business Administration Apprenticeship with the company after finishing sixth form and has now been taken on as a Trainee Buyer. Josh said: “During my apprenticeship at Mors Smitt, I’ve been given a good insight of all areas of the business and I’ve really enjoyed it. I’ve now been given the role of Trainee Buyer; it’s good to be gaining skills in the real world. I would like to be a manager or supervisor in the future.”

An apprenticeship is a real job with training, combining hands-on work with the chance to train and get qualified in a particular industry. Apprentices have the opportunity to gain skills and work experience, while employers gain enthusiastic members of staff who they can train to suit the skill requirements of the company.

Amie Walker, Finance and General Manager at Mors Smitt commented: “Caitlin and Josh fitted in to their respective teams very well from the start, and were a breath of fresh air. They both worked hard and quickly became integral members of the team. Apprenticeships are rewarding for everyone involved, both apprentices and mentors. Apprentices have the opportunity to gain skills for their future careers, while for businesses, it’s a chance to create home-grown talent, resulting in loyal and dedicated additions to the team who understand the company and its processes. We would definitely encourage other businesses to support the next generation by getting on board with apprenticeships.”

Speaking about her decision to undertake an apprenticeship, Caitlin said: “I chose an apprenticeship as I knew that uni was a definite ‘no’ for me. I didn’t want to move away and I already knew that I wanted to work in an office environment as I had previously gained experience in a family business.

“I would encourage people who don’t want to sit in a classroom and would prefer to gain skills on the job to do an apprenticeship. An apprenticeship is more than just a job; you get a qualification at the same time!”

Josh added: “I started an apprenticeship after sixth form as I wanted to get experience and money in my pocket at the same time. I would much rather be in a hands-on learning environment, and I feel that the apprenticeship route gives you the experience to get further in your career. Apprenticeships provide you with a good insight and experience into the working world. I think it’s important to earn money when you’re young to set you up for your life ahead.”