Matthew set to turn up the heat in competition 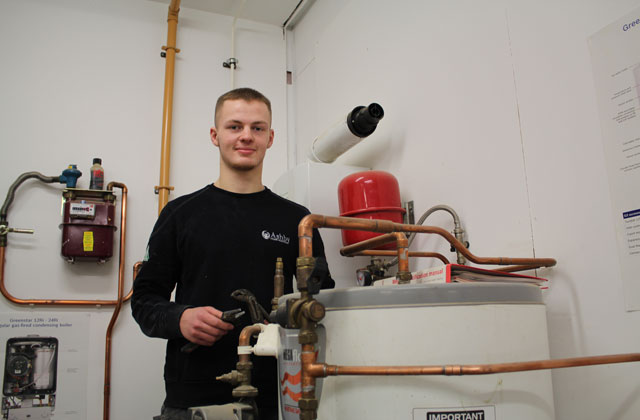 A plumbing apprentice from Burton and South Derbyshire College is set to compete in the regional heats of the HIP Apprentice of the Year competition.

Matthew Suddaby, who is an apprentice for Tom Woodward of Ashby Home Heating, will show off his skills in the competition which will be taking place at Stephenson College on 11th February.

Run by HIP Magazine, the competition is designed to find the UK’s best plumbing apprentice. Now in its 12th year, the event is a fantastic opportunity for trainee plumbers to showcase their skills and win amazing prizes.

Level 2 and 3 students (Level 6 and 7 in Scotland) are invited to enter the competition, during which they will be judged on a number of practical tasks by a panel of industry experts.

The winners of each heat will go on to compete in the grand final, which takes place at the ADEY Innovation Training and Conference Centre in Cheltenham. There are a range of prizes on offer worth up to £10,000, not to mention the prestige for both student and college that comes with winning a national competition.

Matthew said: “My tutor recommended me for the competition as I was ahead of my college work, so I thought I would give it a go. I’m looking forward to it; I like a challenge and the chance to practice my skills to a high standard. I chose an apprenticeship as I’ve always been a practical, hands-on person. I like the variety of work involved and it’s good to be earning and learning at the same time.”

His lecturer, Steve Darby added: “I selected Matthew to take part in the competition as I think he’s got the right attitude to his work. He’s doing well on his apprenticeship, and competing against his peers will be a good opportunity for him to develop his skills further.”

Celia Matthews, Managing Director at HIP Magazine, said: “It’s always a pleasure to see the next generation of plumbing and heating engineers show what they can do. The standard of competition is so high and we can’t wait to see what the 2020 competition brings.”