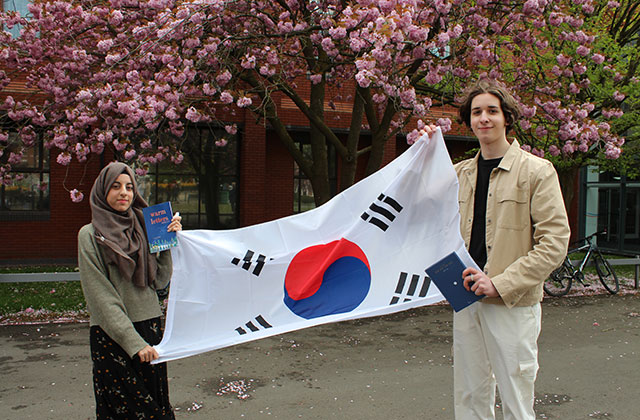 Two Burton and South Derbyshire College (BSDC) have won prizes in an international poetry contest that involved reciting a poem in Korean during a live virtual poetry recital event.

The contest was organised by Jeonju Kijeon College of Korea, and was a celebration of the life and poetry of Yun Dong-Ju. Students took part in the Non-Korean Learner in the UK category where they had to first supply a pre-recorded video submission before being invited to take part in the live final. Students could choose from a selection of poems and use background music for their recital and judges were looking for good understanding of the poem, recital skills and confidence.

The opportunity to take part in the competition came out of BSDC’s partnership with Jeonju College in South Korea. BSDC has worked in partnership with Jeonju Kijeon College since 2016, with regular mutual student and staff visits. In 2019, eight learners and two members of staff visited the city of Jeonju in South Korea which is also one of the UNESCO sites, to learn more about the country and widen their cultural horizons further.

Both students who took part in the poetry contest are International Ambassadors for Burton and South Derbyshire College who support and mentor international learners on their programme of study. This helps to enhance their world view, while developing key skills for their future careers, such as communication, teamwork, leadership and problem solving.

Competition winner, Mihnea Teodor Nica (known as Mike) commented: “I have been learning Korean for the past three years and I feel I have a strong connection to the culture. I am a writer myself and prefer writing poems in Korean as I feel they that they covey a lot of emotion. Having recited 무서운 시간 (A Scary Time) by 윤동주 (Yun DongJu) I was overwhelmed with emotion and empathy towards Korea and its eternal spirit. Rather than seeing things as hard or difficult, I always see them as just things I haven’t learnt or got used to yet.

“Although I was extremely nervous, especially as one of the late poet’s relatives was present, I just tried to focus on enjoying the moment and doing my best. I’m really proud to have won the competition and I feel the whole opportunity is an incredibly big step for me as a writer going forward!”

Hannah Zaki added: “I took part in this competition because I wanted to challenge myself. Having been in lockdown for a while, it had been a long time since I had the opportunity to participate in something new and exciting, so I was really grateful to be able to have something to work towards. When I won second place it was such a great feeling because I got to see the fruition of my hard work. It’s definitely increased my self-confidence and made me feel like I could enter more competitions in the future!

“In the past, I’ve watched many Korean TV events featuring celebrities, and being in the live final of the competition was almost like a glimpse into that world, so I’m really thankful for the chance to have been able to take part in something similar!”