Students take to the stage at the Connections Festival! 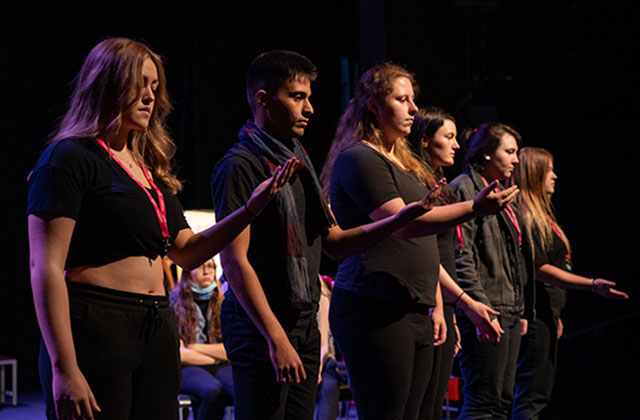 Performing Arts students from Burton and South Derbyshire College (BSDC) have made a triumphant return to the stage with a live audience as part of the National Theatre’s Connections Festival at Derby Theatre.

Over 40 students from Level 3 Acting and Musical Theatre and Level 4 and 5 Acting courses joined forces to give a performance of A Series of Public Apologies (in response to an unfortunate incident in the school lavatories) by John Donnelly, a one act show which focuses on social media and how our attempts to define ourselves in public are shaped by the fear of saying the wrong thing.

Students initially performed the play in the College’s Fleet Street Theatre to a director from the National Theatre team before taking to the stage at Derby Theatre to a socially distanced audience on Thursday 10th June.

Each year the National Theatre commissions ten new plays for young people to perform, bringing together some of the UK's most exciting writers with the theatre-makers of tomorrow. When selecting groups to take part, the National Theatre team look for clarity and audibility, clear story-telling, conviction and energy.

Over 500 youth theatre companies from every corner of the UK are performing in partner theatres as part of the Connections Festival. Burton and South Derbyshire College students are one of six youth theatre companies showcasing their own productions of plays by Mojisola Adebayo, John Donnelly, Vivienne Franzmann and Liz Mytton, Claire Proctor and Justine Themen at Derby Theatre.

Catherine Palfreyman, Performing Arts tutor at BSDC said: “It was fantastic to see students back on stage doing what they do best! The festival has been a great opportunity for students to put on a show and perform at a professional venue. They also had the opportunity to receive feedback from a director at The National Theatre in London, which will be valuable for their future careers in the Performing Arts industry.”